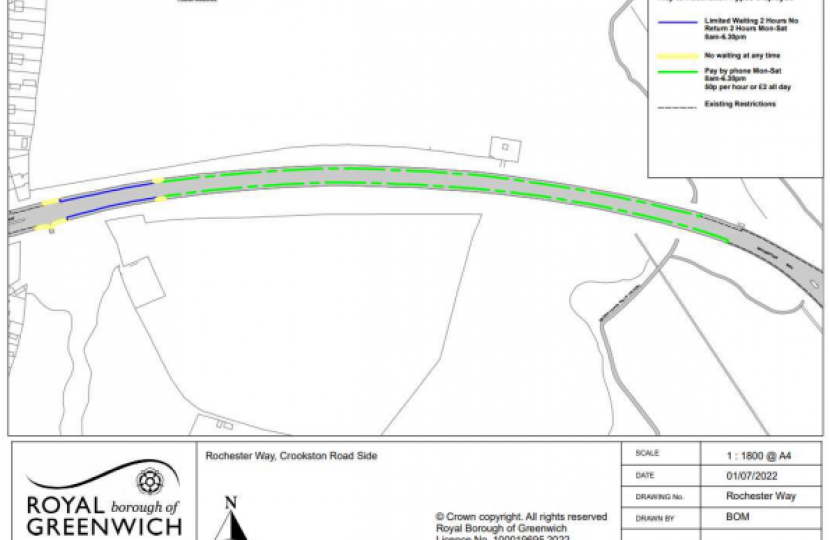 Labour-run Greenwich Council have ignored objections from local residents in Eltham and decided to proceed with plans to install parking restrictions on Rochester Way and Welling Way by Falconwood station.

A considerable number of residents responded to the consultation highlighting the displacement of parking from non-residential roads to residential roads, specifically those roads without parking controls near to Eltham station and in the wider Eltham Park area - after the issue was first highlighted by former Conservative Councillor Spencer Drury.

Council Officers also confirmed resident’s fears that the controls were a precursor for the Council to introduce further restrictions on these residential roads, stating in response to the above concerns that “Royal Greenwich have the power to mitigate that displacement through the introduction of parking controls”.

The decision follows the recent removal of the ‘Attitude Survey’ from the consultation process for new CPZs (Controlled Parking Zones), and the Labour administration’s rejection of a proposal from Opposition Conservative councillors which would guarantee full scrutiny of new CPZs and LTNs (Low Traffic Neighbourhoods) at this month's Full Council meeting.  A separate parking scheme in Eltham came in for widespread criticism last month.

Councillor Matt Hartley, Leader of the Conservative Opposition on Greenwich Council said: “It was only last week that Labour councillors voted down our proposal to ensure full pre-decision scrutiny of future proposed parking schemes - and we haven't had to wait very long until we see yet another example of residents' views on parking being ignored. We are particularly concerned that residents' concerns about the knock-on impact in Eltham Park have been disregarded.  The new administration needs to rethink its approach, which is a recipe for ineffective and costly schemes and wasted time, money and energy."

Charlie Davis, former Conservative councillor for Eltham North, added: “These proposals have been widely rejected by the local community, yet this Labour administration have decided that they know best yet again. Many residents in Eltham will be even more concerned by the admission from Council Officers that they plan to introduce further parking controls on residential streets to address any parking displacement this scheme causes.”

The full council decision can be read here and watch Councillor Matt Hartley's speech on why scrutiny of traffic and parking schemes needs to be improved here.