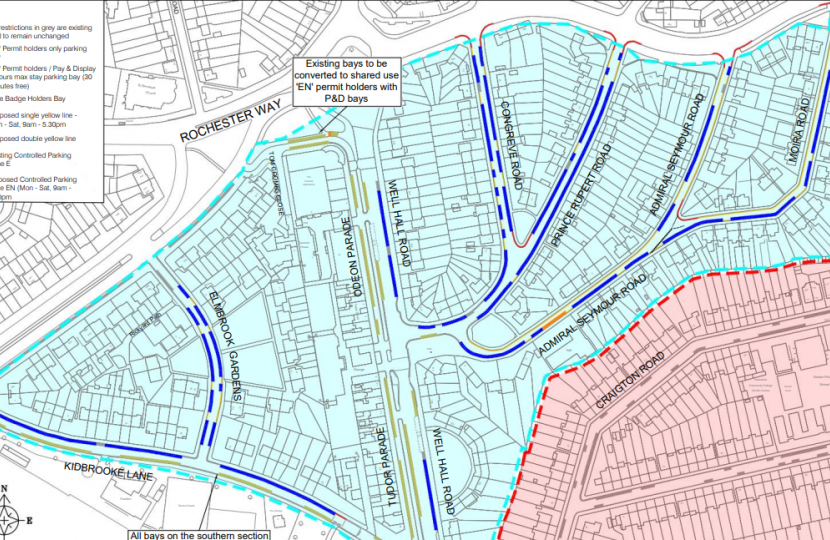 Labour-run Greenwich Council is pressing on with a deeply unpopular Controlled Parking Zone (CPZ) in Eltham despite widespread opposition from residents, community groups, the Tudor Barn and other local businesses - and even their own Labour ward councillors.

Labour's decision to press on with the so-called 'Eltham North CPZ' - labelled "disastrous" by its opponents - was 'called in' for further scrutiny by the Labour ward councillors representing Eltham Page ward.  The Zone will cover the Odeon Parade shops and Well Hall area, Kidbrooke Lane and part of the Progress Estate.  The call-in came after next to no changes were made to the scheme to take account of local concerns, despite several years of consultations.

At Tuesday's scrutiny meeting, Labour's Transport Cabinet Member Averil Lekau was told of concerns about the impact on shops and businesses along Odeon Parade, worries about the impact on the accessibility and use of Progress Hall, and fears from the Tudor Barn that their wedding venue business may collapse due to the impact of parking restrictions on Kidbrooke Lane.  Concerns about the safety of staff leaving the venue at night and forced to catch buses in the early hours were also left unaddressed at the meeting - at which the Cabinet Member defended the CPZ decision.

Councillor Matt Hartley, Leader of the Conservative Opposition, raised serious question marks over the Council's interpretation of consultation results at the meeting - with Officers confirming that only objections to the Traffic Management Order were received, with not a single comment in support.  The Cabinet Member and officers were unable to confirm the total number of objections.

The new zone is part of a significant ramping up of the roll-out of Controlled Parking Zones announced as part of the Council's new Transport Strategy unveiled last month.  At October's Full Council meeting, Councillor Hartley challenged the removal of the 'Attitude Survey' phase of the CPZ consultation process, warning the Labour administration that this would lead to unsuccessful schemes and a waste of taxpayer resources.

Councillor Matt Hartley said: "I'm afraid this is another example of 'Labour Knows Best'.  This is the wrong zone in the wrong place, and I am dismayed that the Council has ignored the concerns of residents, community groups and businesses - especially the Tudor Barn.  This also raises larger questions for our borough.  Labour councillors are pressing ahead 'at pace' with the roll-out of CPZs borough-wide, and have just unilaterally removed a major part of the standard consultation process for establishing new Zones.  That means even less opportunity for businesses and residents to have their say.

"Everyone wants to encourage more walking, cycling and public transport use - but there are huge dangers in the ideological approach that Labour councillors are taking.  They just have to accept that some people need to drive, and some businesses like the Tudor Barn need their customers and staff to drive too - and the Council shouldn't be punishing them for it.  We will continue to press Labour to adopt a 'Principle of Public Consent' to ensure that no Controlled Parking Zone or Low Traffic Neighbourhood is installed unless it has clear public support, over a wide area.

Charlie Davis, former Conservative councillor for Eltham North ward, added: "While some might welcome the small amount of certainty provided by the Council finally reaching a decision on Eltham CPZs, it is scant consolation to the businesses at Odeon Parade and the Tudor Barn who are going to suffer due to loss of business. Plans for the area surrounding Well Hall Road received zero support and substantial opposition from residents and businesses alike, but the Cabinet Member and councillors based in the north of the borough - who have little knowledge of this area - have arrogantly decided to ignore their concerns and that the Council knows better. Without the Council now sitting down with businesses to find a long-term parking solution to work around these parking controls, businesses such as the Tudor Barn faces an increasingly uncertain future.’

A full write-up of the Call-in meeting is available at 853 London and the meeting itself can be watched here.