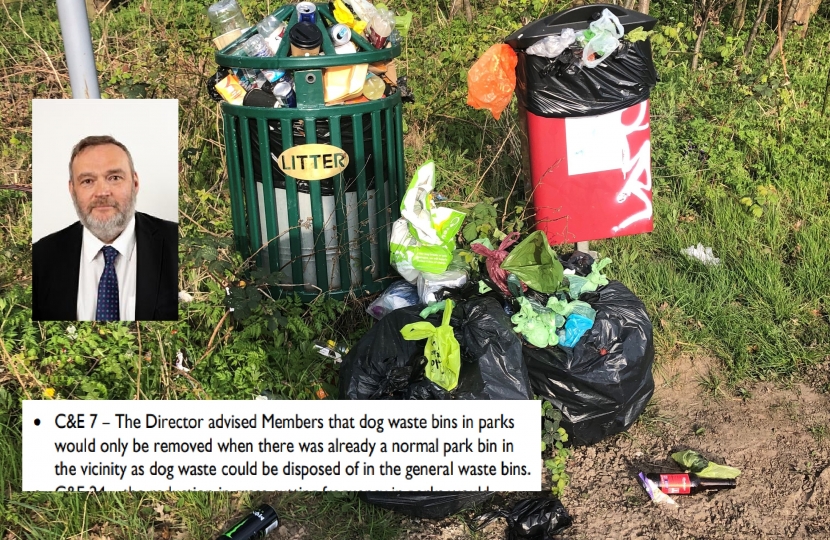 Greenwich Council has delayed plans to remove all dog waste bins from parks and woodlands around the Borough following an intervention by Eltham Councillor Spencer Drury.

Councillor Drury challenged the removal of the bins after noticing one had disappeared from his regular walk at the start of May.  The Council initially confirmed its intention “to remove all park dog bins as a budget saving linked to the Council’s Medium-Term Financial Strategy”.  Whilst the removal plan agreed in early 2020 seemed to have been put on hold due to Covid during 2020/21, the Council intended to remove the dog waste bins in 2021/22.

A response given to Spencer at a Council scrutiny meeting in January 2020 had previously claimed “dog waste bins in parks would only be removed when there was already a normal park bin in the vicinity as dog waste could be disposed of in the general waste bins.”  He then wrote directly to the Cabinet Member for Culture, Communities & Equalities pointing this out, and the fact that the increased level of usage of the parks, combined with greater levels of dog ownership, would result in a substantial rise in the amount of dog mess covering green spaces if the plan went ahead.  This was particularly so at a time when the Council was regularly pleading with residents to take their rubbish home as bins were already overflowing.

No formal response was received from the Cabinet Member, but the Council’s Officers confirmed that no further removal of bins would happen until after the summer's peak park usage period, with the plans reviewed at that point.  A further reassurance was given that no dog waste bin would be removed where there was no normal waste bin close by, returning to the assurance originally given to Spencer in February 2020.   Currently only six bins have been removed, located in Charlton (1); Coldharbour (3), Eltham (1) and Abbey Wood (1).

“I am pleased my intervention had meant the removal of bins has stopped for the moment.  I think this policy needs to be reviewed, not least as the Council are clearly struggling with the current bins overflowing but also as the proposed saving of £12,000 could lead to a really negative impact on the condition of our parks and woodlands.

I know dog waste bins are not the normal focus of debate in the Council, but I hope this intervention will mean that our green spaces remain places which our everyone can enjoy without having to worry about what they are stepping in.”

The minutes of the January 2020 scrutiny meeting can be found here (page 6).