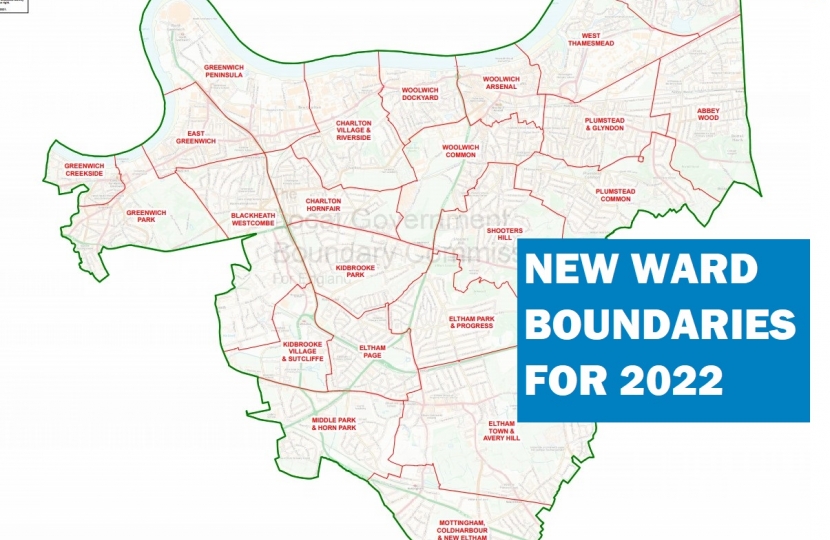 The Local Government Boundary Commission has published its final recommendations for the Royal Borough of Greenwich, confirming the new wards that will elect councillors from next year.

The overall pattern is largely based on the proposal put forward by Greenwich Conservatives in the first stage of the consultation last year, which the independent commission said “provided a large amount of high quality evidence regarding community identity across the borough”. It stated with regard to the Labour proposal that “we considered this to be less strong, and matching less well with evidence from residents, than that provided by the Conservative Group.”

The final recommendations, which will now be approved by Parliament ahead of the elections next May, make a number of modifications to the earlier draft, but retain most of the improvements to the existing ward pattern proposed by Greenwich Conservatives, to much better reflect the Borough’s communities:

“This has been a long and complex process, but it was important to get it right. The way our wards are configured affects how people are represented at the Town Hall, and how decisions are made. We devoted considerable time and effort into engaging with our local communities to help shape the pattern to better reflect local neighbourhoods. We presented 371 pages of detailed evidence, whilst the Labour Council put in a rushed submission of 15 pages that failed to convince the commission.

“There was significant engagement by residents and community groups at both stages of the process, and I’d like to thank all those who took part– many more than the average for consultations like these. Overall, those local voices overcame the Council’s rather lazy attitude that no change was required.“

You can open a detailed copy of the new ward map by opening the attachment below, or go to https://consultation.lgbce.org.uk/node/23310 for an interactive map and links to the full report and consultation responses.

In order to carry out all the hard work we do locally we need volunteers. There are so many ways that you can help and we are always trying to reach out to people who are willing to: