Labour votes against Conservative calls for DLR to Kidbrooke and Eltham 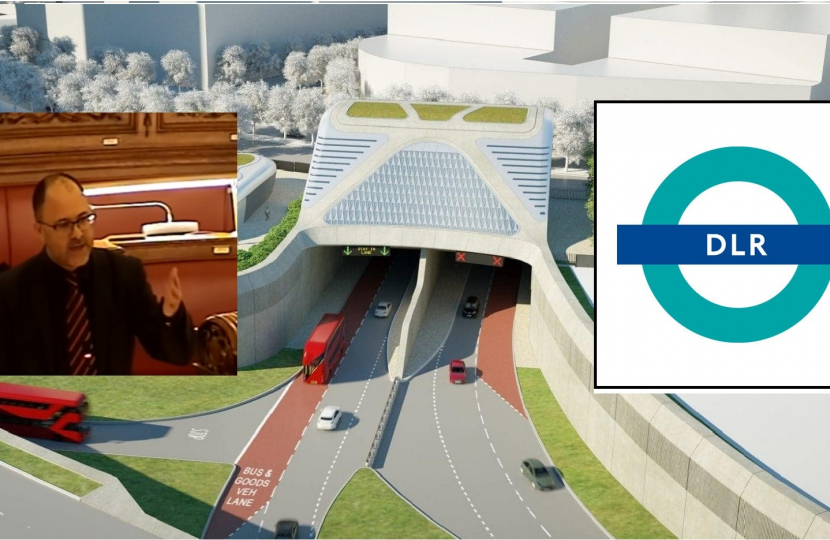 Greenwich's Labour Councillors have voted against a proposal from local Conservatives to call for the DLR to be extended to Kidbrooke and Eltham.

At a meeting of Greenwich Council this week, Labour Councillors brought a motion calling on the Mayor of London to pause all work on the Silvertown Tunnel, despite having campaigned for the project in the first place. The legal contracts have been signed and work on building the tunnel is about to begin.

Conservatives proposed an amendment which would instead have committed the Council to call for the tunnel project to also bring the DLR south of the river with a connection from Canning Town to Kidbrooke and Eltham. This was a proposal we first made seven years ago, in our response to the consultation from Transport for London on the Silvertown Tunnel, but Labour locally have failed to join us in campaigning for it.

"We are calling on the Council to back the consistent position we on this side have taken, and commit to campaigning for this project to be used to bring the DLR to Kidbrooke and Eltham. We believe one of the tunnels could be adapted for this purpose fairly easily, given that the proposed road layout on the Silvertown side is immediately adjacent to the existing DLR line from Canning Town. The Council itself commissioned a feasibility study into this option a decade ago, but then pathetically failed even to submit it for consideration – just one of the many failures of this Labour Council on this issue."

He also argued that if running the DLR through the tunnel is not immediately possible, one of the two tunnels being built should be reserved initially for public transport and electric vehicles, with a new express bus service from Canning Town to Kidbrooke and Eltham, pending further consideration of the DLR project.

Labour Councillors voted against the proposal, despite many of them having previously claimed to support the idea. Instead, they backed the original motion, which belatedly calls for a pause to the whole tunnel scheme, following years of infighting in the Labour Group over whether to reverse their previous support for it. Conservatives were the first to call for a pause to the scheme, seven years ago, in order for the DLR scheme to be considered, but a pause at this late stage would incur massive costs for taxpayers. Councillor Fletcher said in his remarks:

"They’ve spent the last seven years insulting the intelligence of our voters by trying to face both ways on this issue, with the (Labour) Leader writing letters against the tunnel on behalf of the Labour Group whilst continuing to support it as Leader of the Council. That is a ludicrous position to have got into... Those years of Labour infighting were years they could have spent campaigning for something that could actually have made a difference. But they failed to do so."

Conservatives reiterated their support for the tunnel in principle, as a way of alleviating the current congestion and pollution caused by the bottleneck at the Blackwall Tunnel.  Councillor Matt Hartley said:

"Without a DLR link, this is not the tunnel we wanted.  But doing nothing is not an option.  Doing nothing would ignore the “environmental disaster at the approach to the Blackwall tunnel every day”  –  in the words of Clive Efford MP in 2018, a rare occasion I’ve agreed with him, and words uttered before Greenwich Labour began their pretence that it wasn’t them that actually campaigned for this crossing in the first place... There remains a quiet majority of residents who are in favour of the Silvertown Tunnel, even with all of its faults and missed opportunities.  The residents we represent understand that doing nothing is not an option."

You can watch the whole debate on the Conservative proposal for the DLR, and on the the Silvertown Tunnel motion, at the Council's website here.