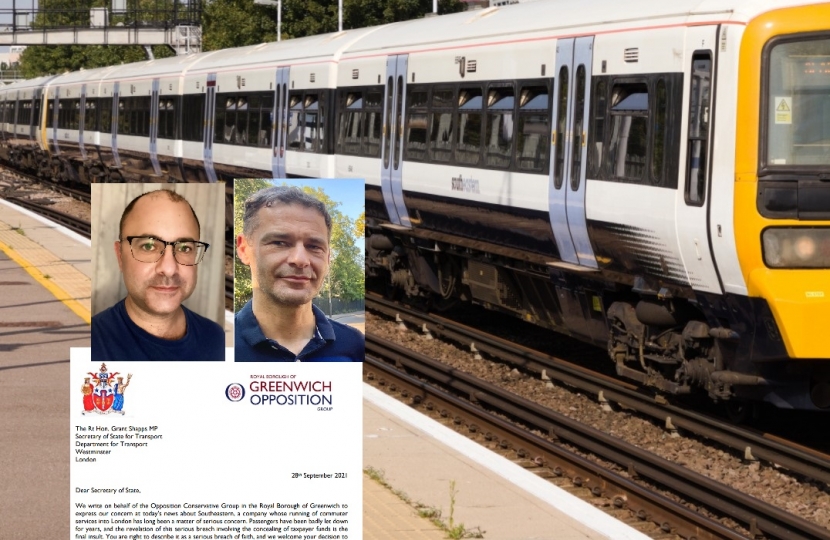 Greenwich Conservatives have renewed our call for commuter rail services in South East London to be devolved to Transport for London, following the government's sacking of train operator Southeastern over serious financial concerns.

Transport Secretary Grant Shapps took action to strip Southeastern of their franchise to run services with effect from next month, after an investigation by the Department for Transport identified evidence that the operator had not declared over £25 million of historic taxpayer funding which should have been returned.  The Government's in-house operator will take over running of services from 17 October.  The Transport Secretary said:

"There is clear, compelling and serious evidence that LSER have breached the trust that is absolutely fundamental to the success of our railways. When trust is broken, we will act decisively. The decision to take control of services makes unequivocally clear that we will not accept anything less from the private sector than a total commitment to their passengers and absolute transparency with taxpayer support."

Following this news, Councillor Nigel Fletcher (Leader of Greenwich Conservatives), and Councillor Matt Clare (Opposition Spokesperson for Transport) have written to Mr Shapps welcoming the decision but urging him to go further and take the opportunity to transfer these services to Transport for London. Greenwich Conservatives have been urging the government to take this action for many years, and our 2018 election manifesto made a commitment to continue campaigning for it.  In their letter, Councillors Fletcher and Clare state:

"Passengers have been badly let down for years, and the revelation of this serious breach involving the concealing of taxpayer funds is the final insult. You are right to describe it as a serious breach of faith, and we welcome your decision to strip them of their franchise.  Following this necessary first step, we urge you now to take the opportunity to transfer the franchise to Transport for London, a step we have been advocating for some years, and which has broad support from across the political parties, from MPs on these routes, and from the London Assembly. This is not an issue of party politics, but of ensuring a better rail service for commuters, and it is the considered view of all those who advocate this move that it would be a positive step to improve the service."

The government has said further details of the new operator will be announced in due course, and we have asked to make further representations on behalf of local residents to help shape the new service.