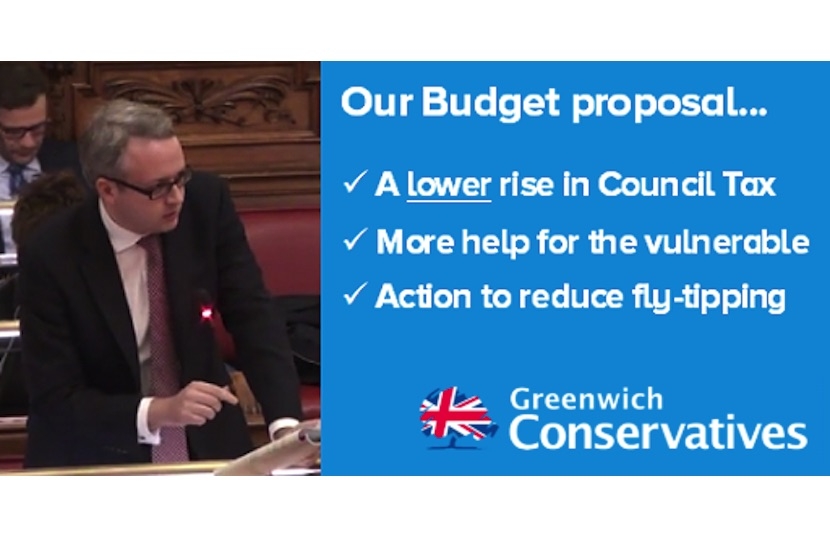 Conservative councillors in Greenwich are set to oppose the Labour-run Council’s planned 2.99% Council Tax rise at a meeting on Wednesday night (28th February) – instead proposing a fully-costed budget alternative that would deliver a lower council tax rise, more support for vulnerable residents and action on flytipping.

Labour’s planned 2.99% Council Tax rise is equivalent to an extra £32.24 a year for a ‘Band D’ property – and is the maximum the council is allowed, by law, to introduce without putting the move to a public vote in a local referendum.

Opposition Conservative councillors are putting their alternative proposal to a vote at Woolwich Town Hall on Wednesday (28th February). The Conservative proposal would deliver the same increases in funding for adult social care, homelessness and staff pay as Labour’s plan – in addition to:

The fully-costed plan, which has been independently validated by council officers as feasible, would be funded by removing £1.6 million of wasteful spending including;

The Conservative plan would also commit the council to review, for the future, its approach to paid overtime – which currently costs £2.3 million a year – and its approach to procurement, which in total comes to hundreds of millions of pounds a year – which could identify even greater long-term savings to the council’s costs.

Councillor Matt Hartley, Leader of Greenwich Conservatives, said: “Yet again, Labour councillors have gone straight for the highest tax hike they can get away with, and yet again, they have failed to get their house in order first.

“We have already identified £1.6 million of waste and inefficiency that should be dealt with before the council digs even deeper into taxpayers’ pockets – and the reality is there is probably an even greater sum that could be saved without affecting services.

“Our plan would instead mean a lower Council Tax rise for everyone, more than 15,000 residents on the lowest incomes lifted out of Council Tax altogether, and action on flytipping across the borough through piloting free bulky waste collections.

“It’s a simple question of priorities – continuing to waste public money, or working smarter to keep taxes lower while doing more to support those most in need. Residents deserve better than Labour’s plan – and I hope Labour councillors will see sense and vote for our fully-costed proposal.”

The agenda for the meeting can be found here and the meeting will be streamed online here.