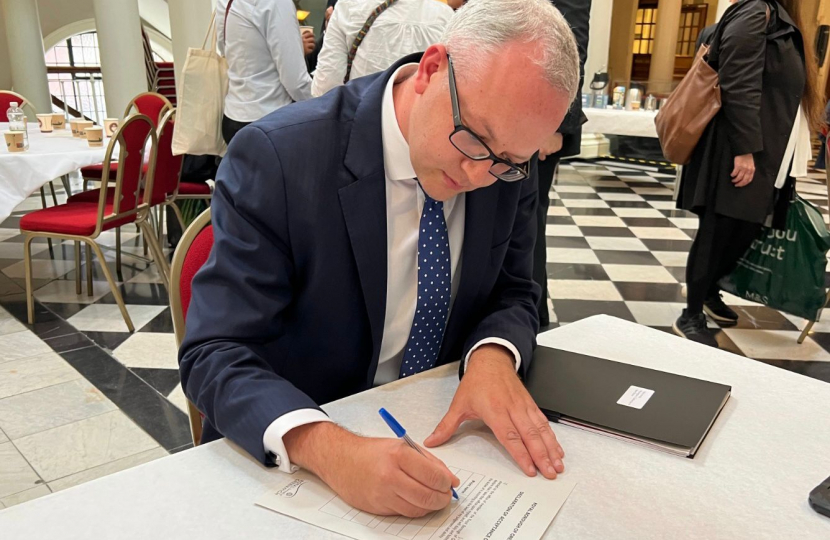 Re-elected Conservative councillors Matt Hartley, Pat Greenwell and John Hills have signed in at the Town Hall, as Greenwich Council's new four-year term gets under way.

Three Conservative councillors were re-elected in the 2022 local elections, with Matt Hartley and John Hills returning to serve Mottingham, Coldharbour and New Eltham ward residents, and Pat Greenwell re-elected to serve Eltham Town & Avery Hill ward.  Labour won 52 out of 55 seats on the Council, with Matt, John and Pat now the only Opposition Councillors at the Town Hall.  For full details of the results see local news website 853.

Matt Hartley will now serve again as Leader of the Opposition for the coming Council term - a role he previously held for five years, between 2015 and 2020.

Councillor Matt Hartley said: "I am delighted to have been re-elected to serve Mottingham, Coldharbour and New Eltham residents for another 4 years, alongside my colleague John Hills.  It's a job that I love, and I will do it to the very best of my ability.

"I will speak plainly when I say I am devastated to have lost so many friends and colleagues from the Conservative Group in these elections.  As well as Roger Tester - who I have been proud to serve alongside in Coldharbour & New Eltham ward since 2018 - Nigel Fletcher, Geoff Brighty, Spencer Drury and Charlie Davis are all huge losses to the wards they championed as councillors, and to the Council as a whole.

"We are all incredibly grateful for my predecessor Nigel Fletcher's work as Leader of the Opposition since 2020.  No-one is more passionate about our borough - he's a great friend and a true public servant. I am going to miss serving with him, and everyone not returned, immensely.

"Amidst all this disappointing news, I do want to congratulate my incredible ward colleague John Hills - who secured his 7th consecutive election victory on 5th May! - and also the tireless Pat Greenwell, who I am thrilled will also have the chance to continue her hard work for residents.

"Pat, John and I are now the only Opposition councillors on Greenwich Council - a heavy responsibility, and one that we will all take very seriously.  All three of us will do the very best job we can, both as ward councillors as a much-reduced Group at the Town Hall.

"Finally, I want to thank everyone who supported our local elections campaign over the last year - not least our team of 5am to 9pm heroes helping on polling day!  And I'd like to add my thanks to those of countless others to everyone who took part in our local democratic process by voting on 5th May."