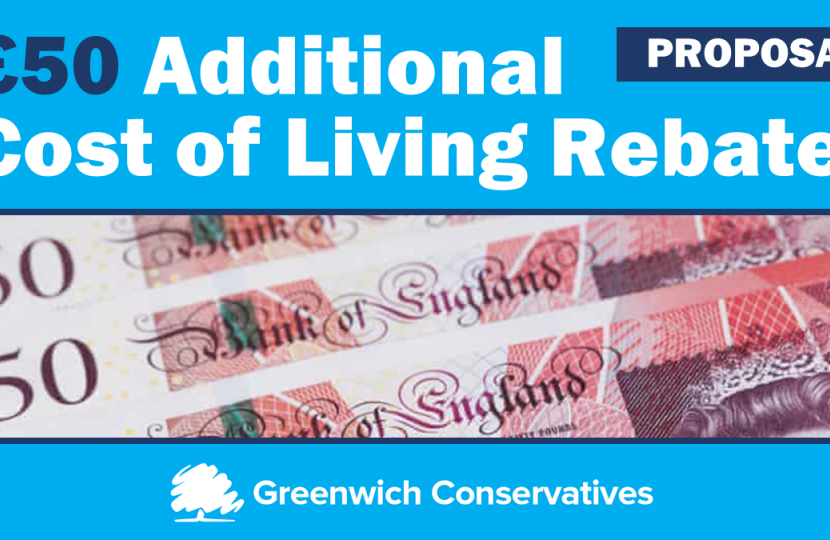 Conservative councillors have proposed that Greenwich Council pays a £50 Additional Cost of Living Rebate to help more than 99,700 local households deal with the rising cost of living.

The proposal will be voted on at the Town Hall on Wednesday 29 June, at the first meeting of the Council since a new Labour administration took power after the local elections in May.

The proposal is fully costed, and would be funded using more than £4.9 million provided to Greenwich Council by the Conservative Government, which is currently unallocated in the Council’s accounts. Three months into the 2022/23 financial year, the new Labour administration at the Town Hall has not brought forward any plans to deploy this Government funding.

The proposed £50 Cost of Living Rebate would have the effect of more than cancelling out Labour’s April Council Tax rise for households in Band A to D. People in smaller properties, and residents on low incomes who are receiving Council Tax Support, would feel the most benefit if the proposal is taken up.

Councillor Matt Hartley, Leader of the Conservative Opposition on Greenwich Council, said: “Greenwich Council should be doing everything it can to help our residents through this cost of living crisis. The £50 Cost of Living Rebate that I am proposing will help more than 99,700 households in our borough, and can be paid for by more than £4.9 million of Government funding that is currently sitting untouched.

“Instead of leaving this funding sitting in the Council’s accounts for another three months, I am calling on the new Labour administration to get this money into residents’ pockets now. This addition Rebate would go some way to undoing the damage of Labour councillors’ Council Tax rises in April, which came at the worst possible time for our residents. “The new Labour leadership has said their top priority is the cost of living crisis - so, this vote is a chance to prove it. I hope Labour councillors will do the right thing and give our £50 Cost of Living Rebate unanimous support at the Town Hall.”

Read the Conservative Group’s full costed proposal for the Additional Cost of Living Rebate at the link below.