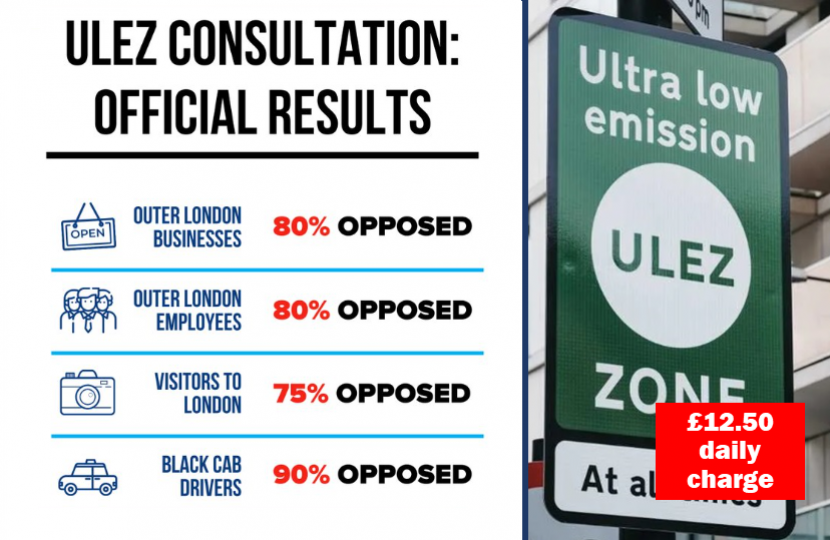 The ULEZ expansion means a £12.50 daily charge for residents and business owners with non-compliant vehicles driven anywhere in Greater London - instead of just within the South Circular.  The Mayor previously promised to listen if the plan received 'overwhelming opposition' in the public consultation earlier this year - but is breaking that very promise.  The consultation results, released today, show clear opposition from:

Following today's announcement, the zone will go live on 29th August 2023.  Conservative-run boroughs Bexley, Hillingdon and Harrow have today said they will "resist its implementation by all means at their disposal."

In July Greenwich Conservative councillors put forward a motion condemning the expansion to the vote at Woolwich Town Hall.  The motion was defeated by local Labour councillors, who have enthusiastically backed the expansion.

Councillor Matt Hartley, Leader of the Conservative Opposition on Greenwich Council, said: "Sadiq Khan should be ashamed for breaking his promise to listen to the results of this consultation - and Labour-run Councils across London should be ashamed for backing this wrong-headed ULEZ expansion.  An overwhelming majority of Londoners are against this plan - which will punish people with older vehicles with a £12.50 daily charge in the middle of a cost of living crisis.  This is particularly unfair in areas with poorer public transport links - including Eltham, New Eltham and Mottingham here in the Royal Borough of Greenwich, as well as communities in Outer London boroughs.

"There are far better ways to improve air quality than spending hundreds of millions of pounds on a vast camera network. Sadiq Khan needs to listen to the anger he has created, set his arrogance to one side and abandon this plan."