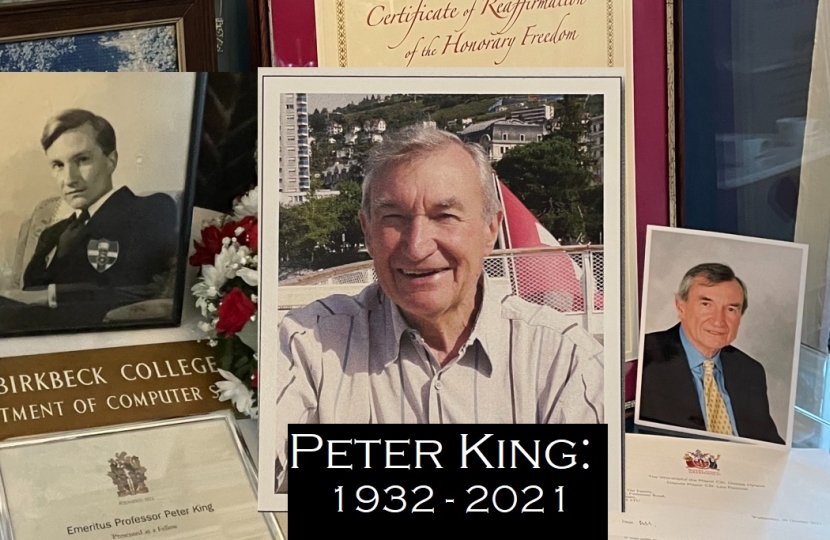 Tributes have been paid to former Eltham Councillor Peter King, who has died at the age of 89. Alongside a distinguished academic career, Professor King served on Greenwich Council for over 30 years, representing his local community in Eltham South, and rose to become Leader of the Opposition. He also gave years of loyal service to Greenwich Conservatives, with several terms as our Chairman. Following his retirement from the Council in 2010, he was awarded the Freedom of the Royal Borough, the Council's highest honour.

At his funeral in Eltham this week, Peter's family and friends were joined by present and former Councillors from across the political parties, led by the Mayor of Greenwich. Tributes were also paid at the start of business at the last meeting of Greenwich Council two weeks ago. Amongst those paying tribute on that occasion were the Labour Leader of the Council, Danny Thorpe, the Leader of Greenwich Conservatives, Nigel Fletcher, former Conservative leaders Matt Hartley and Spencer Drury; and Matt Clare, one of the Councillors who succeeded Peter in representing Eltham South ward. You can watch these tributes on the Council website by clicking here.

As well as his political and public service to the people of Eltham, Peter King also made a substantial contribution to academia, as a pioneer in the study of computer science. He was Director of the Computer Centre at Aberystwyth University, which he established in 1966, before moving to Birkbeck College at the University of London as their first Professor of Computer Science in 1970. He oversaw the growth of the computer science department as its head until 1986, when he stood down to focus on research into database management.  He remained active in the college, and on his retirement in 2009 was made an Emeritus Professor in recognition of his outstanding contribution.

During his years on Greenwich Council, two of Peter's proudest achievements were championing Eltham High Street to ensure it remained a viable and thriving centre, and helping preserve trees along residential roads by proposing tree protection orders, including along Court Road, where he lived for many years.  His family recalls him reflecting on public service by saying:

"I came to realise that it isn't possible to change the world, no matter how hard one tries. But if I can achieve just one small thing in my patch, then that's what I put my energy into."

Peter King achieved much more that "just one small thing" for residents of Eltham. Greenwich Conservatives mourn his loss, and give thanks for all he gave to us.

Peter's family thanks all those who have sent kind messages of sympathy and condolence, and have suggested that anyone wishing to make a donation in his memory might like to support the work of Demelza Hospice in Eltham: https://www.demelza.org.uk/support-us/make-a-donation/