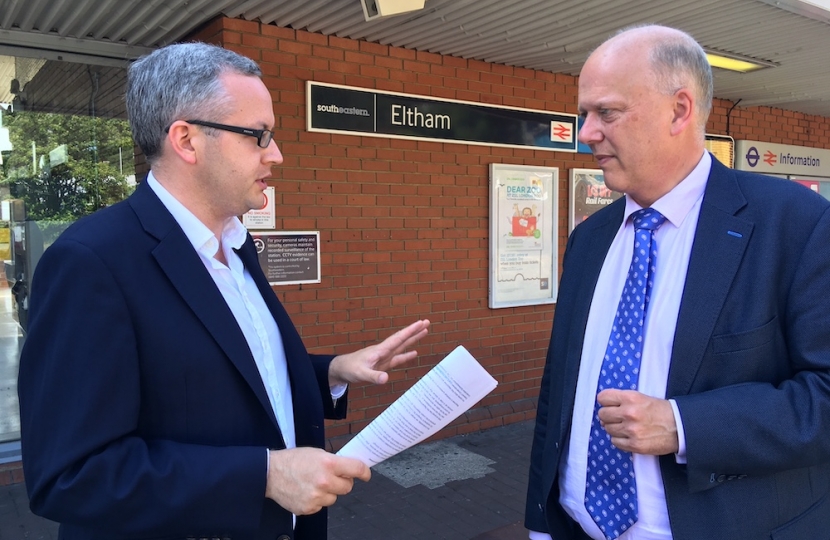 Greenwich Conservatives have welcomed confirmation that plans to introduce ‘one line, one terminal’ on the South Eastern railway network have been scrapped. Conservative councillors in the borough have been campaigning against the proposed change since it was first suggested in the Spring, including bringing Secretary of State Chris Grayling to Eltham during the consultation process.

There is mixed news for train serves running through the borough, however, contained in the Department for Transport’s franchising specification, released this week. Local Conservatives have welcomed the fact that Bexleyheath line trains from stations including Eltham, Kidbrooke and Blackheath will continue to serve both Charing Cross and Cannon Street, after campaigning hard against ‘one line, one terminal’.

However, Victoria Line trains will switch from the Bexleyheath Line to the Sidcup Line from 2022, meaning an end to trains to Victoria from Eltham, Kidbrooke and Blackheath – with more trains to Charing Cross instead. To compensate for the loss of direct services, there will be more trains from Lewisham to Victoria.

As has previously been announced, Greenwich Line trains will go to Cannon Street only – and in a separate move, a new service will be introduced run by Thameslink, enabling passengers on the Greenwich Line to take trains to Luton via Blackfriars.

The measures announced this week also include plans to bring together ‘track and train’ in an effort to get train companies and Network Rail, which is responsible for the track, to work more closely together – an approach being piloted on the South Eastern network.

Councillor Matt Hartley, Leader of Greenwich Conservatives, said: “I am hugely relieved that the ‘one line, one terminal’ suggestion has been shelved – and pleased that the Secretary of State has listened to the strength of local feeling, including during his visit to Eltham earlier in the year. The loss of direct services to Victoria is disappointing, but there does at least seem to have been mitigations put in place.

“In many ways the most significant part of this announcement is the pilot of bringing together ‘track and train’ – which will hopefully put an end to the ‘blame game’ between the operator and Network Rail when things go wrong.

“While this is welcome news, however, we remain of the view – as I told the Secretary of State when we met in May – that Transport for London should be given control of commuter rail, including South Eastern. We will continue to make the case for this more radical step.” “In the meantime, we would like to thank all the residents who took part in the consultation that has helped preserved multi-terminal services for our borough.”