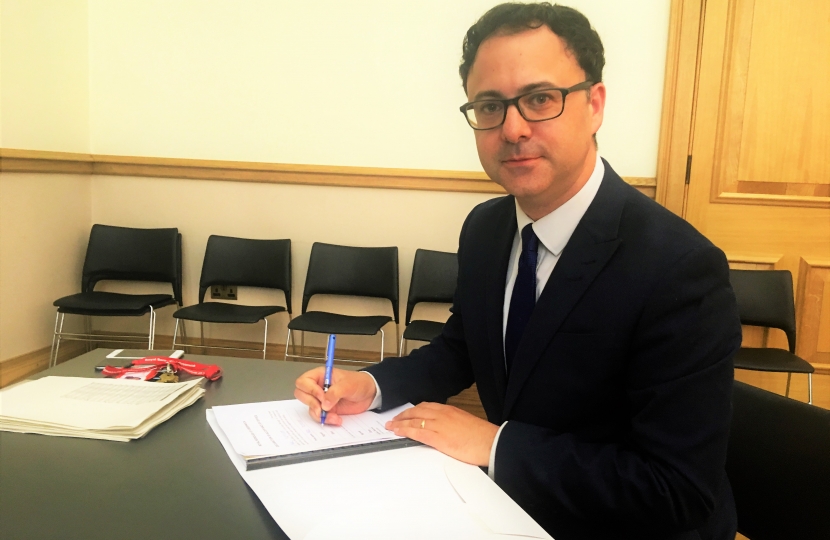 Greenwich Conservatives have elected a new Leader to follow Councillor Matt Hartley, who announced last month his intention to step down after five years in the role. At the Annual General Meeting of Greenwich Council’s Conservative Group, held last night (Monday 6th April) by video-conference, Councillor Nigel Fletcher was unanimously chosen to lead the Group, and to be the next Leader of the Opposition in the Royal Borough. Councillor Charlie Davis was elected as the new Deputy Leader, with Councillor Geoff Brighty remaining as Opposition Chief Whip.

Councillor Fletcher, 40, was first elected in 2005, representing Eltham North ward until 2014. He returned to the Council in 2018 representing Eltham South ward, and has been Deputy Leader of the Opposition since then. He said today: “I’m very grateful and honoured to have been chosen by my colleagues to lead the Conservative Group, and become our borough’s next Leader of the Opposition. I am also delighted that my friend Charlie Davis will be joining me in the leadership team, and that Geoff Brighty will continue as our excellent Whip.

“I look forward to building on the formidable achievements of Matt Hartley, who has been an exceptional Leader throughout the last five years, and shown during recent weeks the value of responsible Opposition as we face unprecedented challenges as a Borough.

“The time for fuller statements and future plans will come later, but for now my priority will be to work with Matt on the Opposition’s response to the COVID-19 crisis, which remains the overriding focus for the whole Council. I pay tribute to all our staff and other key workers who are working so hard to save lives and support the most vulnerable people in our communities. We have rightly given our full support to the Council’s leadership during this time, and that support will continue when I formally assume my new responsibilities.”

Councillor Charlie Davis, 25, was first elected for Eltham North ward in 2016. He added: “I'm delighted to be joining Nigel as his Deputy with the backing of our colleagues in the Council Group. I'm really looking to building on the great work we have carried out as a group under Matt's leadership. “At this time, I echo Nigel's sentiments and give our backing to the Council's leadership and staff during these difficult times. They have our full support and heartfelt gratitude”

Outgoing Leader, Councillor Matt Hartley, said: “Amidst this unprecedented Coronavirus crisis, normal council politics is effectively on hold and we will continue to support the administration’s response in every way we can. There will come a time, however, when normal politics resumes, and a strong, well-led Opposition at the Town Hall is a crucial part of that. I could not ask for a better successor as Leader of the Opposition than Nigel Fletcher, who I know will work tirelessly for our borough in this new role in the years ahead.”

The changes to the Group’s leadership take effect immediately, but Councillor Hartley will continue to serve as Leader of the Opposition until the annual formal changes in Council office-holders takes place.