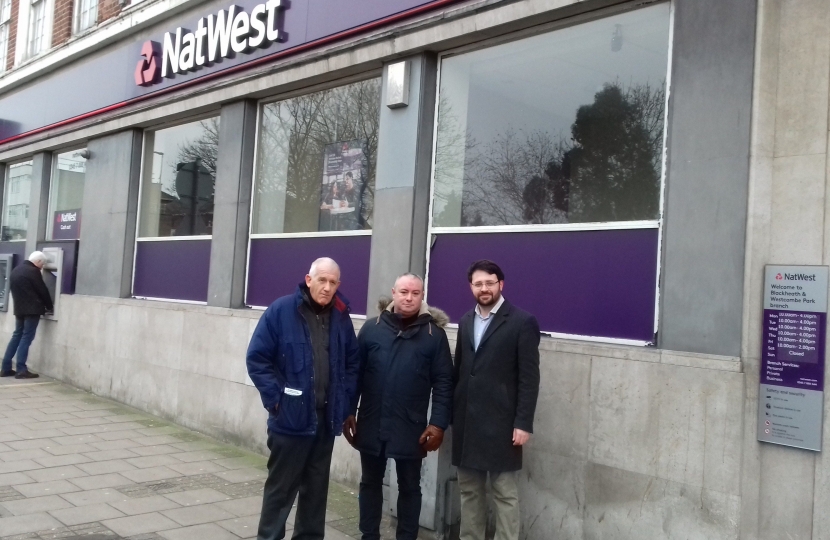 Local Conservatives have criticised Royal Bank of Scotland/NatWest after learning that the Blackheath and Westcombe Park NatWest branch at the Standard is still set to close, despite a petition signed by more than 220 people calling for a change of course. In a letter dated 8th May responding to the petition, hich was organised and submitted by Blackheath Westcombe Conservatives, the Chief Executive of the Royal Bank of Scotland Chief Executive said that the bank "won't be reversing our decision".

The bank acknowledged the strength of feeling about the closure and admitted that local residents and businesses were likely to be unhappy with their decision, but cited the increasing use of online and mobile banking saying that transactions at the branch had declined by 57% since 2011 with many customers using digital banking exclusively rather than visiting the branch. The letter pointed to five alternative branches within 3.2 miles of the Blackheath and Westcombe Park branch and also said that customers would be able to carry out some transactions at local Post Offices.

Councillor Geoff Brighty, Conservative Councillor for Blackheath Westcombe ward, said: "Nonetheless, there will be inconvenience for many customers who remain with NatWest. While the bank has been made aware of the effect their decision could have on its customers and local feelings about the proposed closure, it is a pity they were not willing to re-consider.

"I remain concerned about the impact of local residents who are not able to - or indeed, choose not to - bank via online or mobile services. I wouldn't be surprised if NatWest lose many customers as a result of this move."