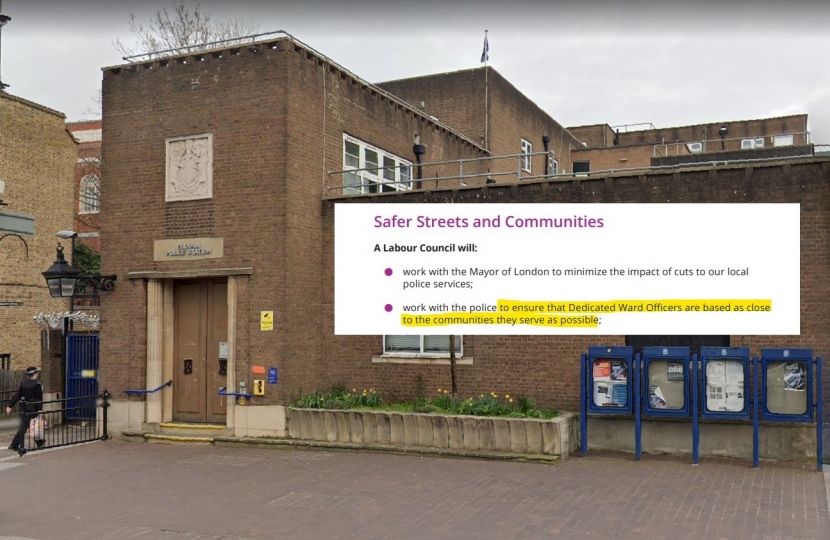 The Labour leadership of Greenwich Council has refused to honour its manifesto promise to ensure that local police teams "are based as close to the communities they serve as possible", by voting against a move to retain a local police base in Eltham Town Centre.

With Eltham police station scheduled to be permanently closed and vacated in August this year, Conservative Councillors have proposed that the Council should provide space in the nearby Eltham Centre as a local base for police teams who would otherwise have to travel in from Sidcup or Plumstead and return there to do any paperwork during their shifts.  Speaking during the debate, Councillor Charlie Davis, Deputy Leader of the Opposition and a Councillor for Eltham North, said he had heard significant concerns from residents and the police themselves, who would have to spend lengthy periods on buses to reach the areas they are supposed to be policing. He said:

"Whilst the ideal scenario would be of course that Eltham Police Station does not close, we do need to make contingency plans, and I think the most obvious contingency plan here is for the Council to do the right thing and work with the police to find that permanent space in Eltham... it makes it a lot easier for those police officers to then get to the areas that they represent."

The Eltham Centre is owned by Greenwich Council, and currently has unused meeting rooms and other areas that could easily be made available to police teams if the Council wished.

However, Labour Councillors refused to support the proposal to offer police this space or another suitable local building.  In their responses to the motion, neither the Labour Council Leader nor his Cabinet Member for Community Safety explained why they would not do so.  This was despite their manifesto for the 2018 Council elections stating: "A Labour Council will... ensure that Dedicated Ward Offices are based as close to the communities they serve as possible."

Referring to this pledge, Councillor Davis challenged Labour councillors in the Chamber, saying:

"The main party in this chamber promised residents in Eltham and across this Borough that they would ensure that dedicated ward officers were based in the area they represent, and if the Labour Party decide to vote this motion down today, they have broken that promise to residents."

In the vote that followed, every Labour member voted against the proposal, with only the Conservatives voting to provide the police with space in the Eltham Centre. The Leader of Greenwich Conservatives, Councillor Nigel Fletcher, commented:  "Labour in Greenwich have consistently refused to help keep police teams local, despite pledging to do so when they were elected. We put forward a sensible proposal that would have allowed them to keep their promise, but they have once again failed to do so. Residents are entitled to ask them why they won't take even this simple step to help local police."

You can watch the full debate on the Greenwich Council website at this link.