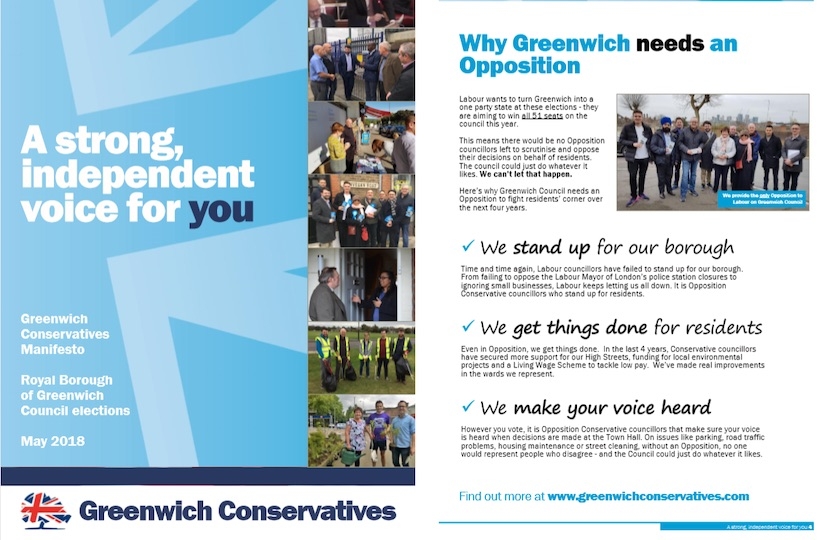 Local Conservatives in Greenwich have launched their manifesto for the 2018 council elections, outlining their campaigning priorities if elected to Greenwich Council in the elections on Thursday 3rd May.

The manifesto, ‘A strong, independent voice for you’, sets out what Conservative councillors have achieved since the last elections four years ago, and makes 34 specific pledges for what they will do as a strong Opposition Group holding the Labour-run Council to account over the next four years.

The manifesto sets out Greenwich Conservatives’ campaigning priorities over the next four years – including on local health, education, transport, small businesses, policing, housing, the environment and supporting the vulnerable – as well as how Conservative Opposition councillors intend to hold the Labour-run Council to account.

There are currently nine Conservative councillors at the Town Hall, compared to Labour’s 42, with some commentators predicting that Labour could win all 51 seats on May 3rd.

Councillor Matt Hartley, Leader of Greenwich Conservatives, said: “Most local election manifestos set out what a political party would do if it took over the running of the council after the election. This one doesn’t. Instead, we are asking for residents to support us in the local elections to ensure our borough continues to have a strong Opposition Group at the Town Hall.

“As the only Opposition to the Labour Party, which has run Greenwich Council for the last 47 years, at the Town Hall we have worked hard to stand up for our area, get things done and make residents’ voices heard when decisions are made.

“We have exposed Labour’s waste and inefficiency and opposed their poor decisions – and we have also brought about positive change, securing help for local small businesses, measures to make our borough cleaner and greener, and more support for the vulnerable.

“This year, however, the very existence of an Opposition is under threat. Labour wants to turn Greenwich into a one party state by winning 51 seats on the Council this year.

“That means there would be no Opposition councillors left to scrutinise and oppose their decisions – and no one left to represent people who disagree. The Council could just do whatever it likes. We can’t let that happen.

“We hope voters will support us on May 3rd so we can continue to give residents the strong, independent voice they need at the Town Hall.”

Download the Greenwich Conservatives 2018 Manifesto below and read Cllr Matt Hartley's blog on the launch here.