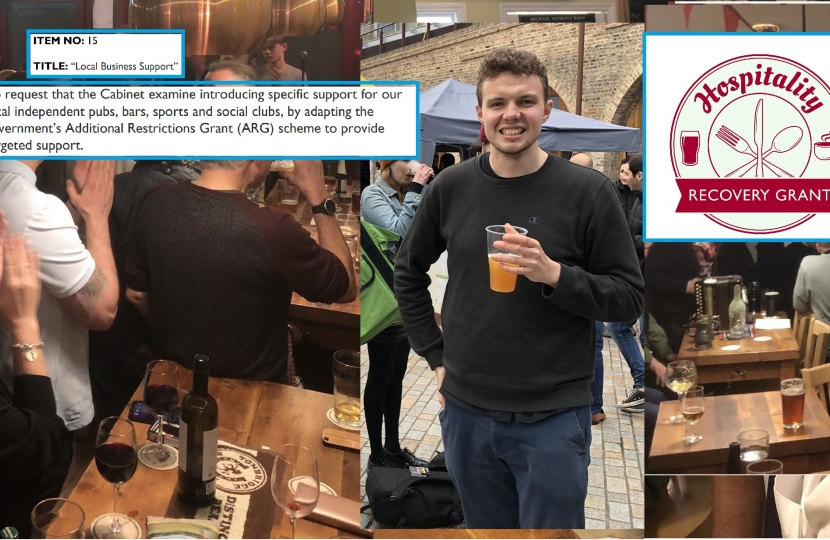 Greenwich Council this week adopted a plan proposed by local Conservatives to target up to £3 million of central government funding on local pubs and hospitality venues in the Borough that are struggling with the impact of COVID-19 restrictions.

The announcement of the The Hospitality Recovery Grant came several weeks after Greenwich Conservatives' Deputy Leader Charlie Davis made the call for the Council to adopt a similar scheme of targeted funding to those already implemented by neighbouring Conservative-controlled Councils in Bexley and Bromley.

Local Conservatives had also included a call for the proposal in a motion to the Council for its meeting on the 26th February. The Council's announcement of the new fund came on the day the motion was due to be debated.

"I'm delighted that the Council has listened to what we were proposing and has followed the lead of our neighbouring Conservative boroughs in providing this extra help to our local pubs, bars and other hospitality venues. The government has already provided huge amounts of support to local businesses through existing grant schemes that are being administered by the Council, and this announcement will ensure more of that help reaches those who have been most badly affected."

The Conservative motion to Council on supporting local business also called for a halt to increases in the rents charged by the Council on its commercial tenants. Many independent traders are being hit with substantial rises in their rent by the Council at a time when they can least afford it. Despite having criticised local private landlords for imposing similar rises, Labour Councillors refused to reconsider their policy, and voted to remove these parts of the motion.

"We understand that in normal times the Council has to strike a balance and review the rents charged to its commercial tenants, but these are far from normal times. All we are asking for is a freeze on these rises until the end of this year to give local businesses a bit of breathing space to get back on their feet. I'm very disappointed that the Council didn't use the opportunity of their other announcements to make this reasonable offer and provide some much-needed additional help to our struggling local shops and businesses."

Councillor Geoffrey Brighty, Opposition Spokesperson for Business and Enterprise, said in the debate:

"This is not the time to be placing extra burdens on business - rather, we should be seeking to reduce burdens where we can... A reasonable and understanding approach to rents as set out in the motion is vital. Equally, a twelve-month pause on the renewal of existing leases might well help some businesses as they assess whether they can continue to commit to a lease for up to ten years, given the effects of the pandemic and the rise in online shopping."

You can watch the video of the Council meeting where the business support motion was debated on the Greenwich Council YouTube channel.

Greenwich Conservatives have championed local businesses and campaigned for greater support from the Council to help our high streets and parades survive and recover from the effects of the COVID-19 pandemic.

We have called for: