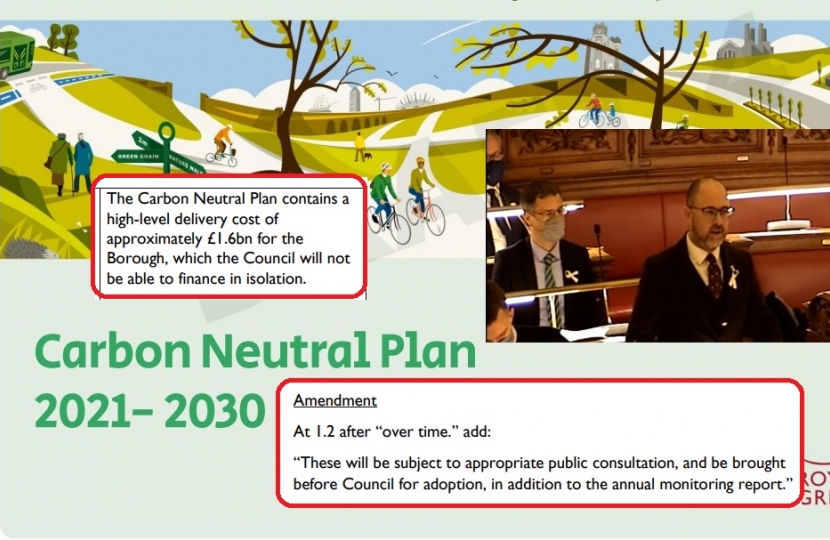 Greenwich Conservatives have welcomed the formal adoption of the Greenwich Carbon Neutral Plan, which sets out the actions that need to be taken for the Royal Borough of Greenwich to become Carbon Neutral by 2030. But Opposition Councillors have called for an honest debate about the significant costs and how they will be met.

The plan was commissioned following the Council's declaration of a climate emergency in 2019, as a result of demands by Greenwich Conservatives at that time for specific and measurable actions to be set out. It was published in draft form and was subject to public consultation before it was formally approved by the full Council this week. The modelling of the measures required to achieve Carbon Neutrality shows the extent of the challenge, with the costs to the Council and other organisations estimated at £1.6 billion. These sums "are far in excess of current Council budgets" and for many of the Council's actions the plan states "Funding not yet identified".

Speaking in the debate at the Town Hall, Leader of the Opposition Councillor Nigel Fletcher said:

"This is a climate emergency. It's not just a phrase - if we're going to take it seriously it does require drastic action... We do need to be honest with people about that, to be frank that there will be difficult decisions required in order to meet that... At the point at which we are going to make those commitments, we need to ensure that we take the public with us, and that we properly consult them, and that this council in full knowledge debates and adopts those".

Councillor Fletcher pointed out that many of the "modelling assumptions" on which the Carbon Neutral Plan is based were not yet formal commitments, and that for the plan to succeed, these would need to be formally adopted. He then proposed an amendment to the Council's decision to make clear that the public should be properly consulted on such future commitments and other changes to the plan. He argued that:

"[This Plan] is the action that follows from the emergency we declared two years ago, and we fully support the aspiration to become carbon neutral by 2030. We will have lots of debates in this chamber about how we get there- our plea is just to ensure we're clear that we will be sharing those debates with the residents who elect us."

The amendment proposed by the Conservative Group was then accepted by the Council's Labour leadership, meaning the requirement for public consultation and approval by Council of future measures now forms part of the resolution adopted by the the Council.

Later in the debate, Greenwich Conservatives' spokesperson for Environment and Climate Change, Councillor Matt Clare, made some specific points about the plan, urging more action on issues such as replacing gas boilers, promoting solar power and planting more trees. He concluded:

"Above all we need to be focused, In this report there are some wonderful ideas but my fear is we could get lost in things where we have less influence as a Council rather than focusing on that where we have most influence."

Councillor Matt Hartley also welcomed the plan, but warned that the Council should not use carbon offsetting as a "get out clause" in future if insufficient progress was made towards the target, and called for this to be ruled out.