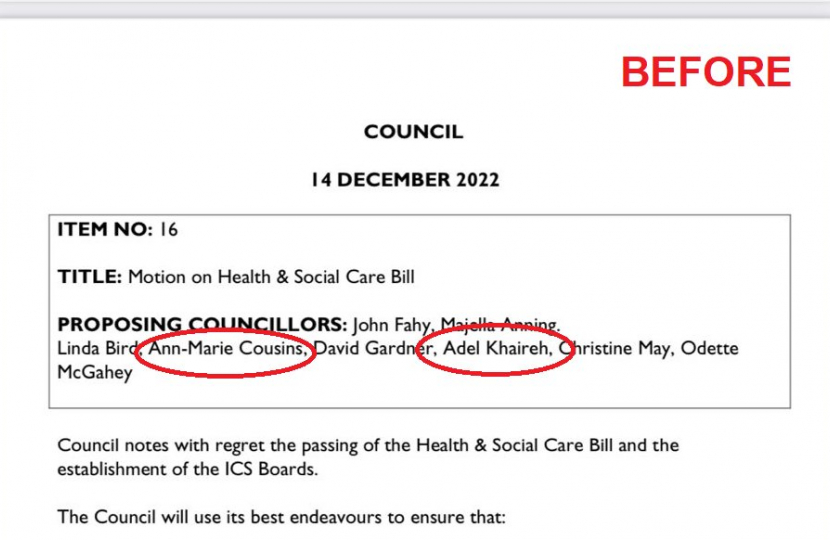 Labour councillors have been criticised for putting forward a 'reckless' proposal on the Council's relationship with NHS South East London that even Council Officers have warned could lead to spending "good money after bad".

Greenwich Labour councillors have put forward a motion for December's Council meeting that would commit the Council "use its best endeavours" to interfere in the operations of the NHS South East London Integrated Care Board (ICB) - and also repeats baseless scaremongering over the supposed 'privatisation' of the health service.

In a highly unusual move, the Council's Deputy Chief Executive has had to issue a formal warning to councillors that the use of the phrase 'best endeavours' could lead to the Council spending "good money after bad" - and also raised officers' concerns about the Labour proposal's reference to reviewing the Council's own social care provision.

Two Labour Cabinet Members added their names in support of the proposal - which will come as an embarassment to the new Council administration, after years of RBG building a reputation as a good and reliable partner to local NHS partners.  The two Cabinet Members' names were quietly removed from the council's website after the motion was published.

Councillor Matt Hartley, Leader of the Conservative Opposition at the Town Hall, said: "It is frankly astonishing that the new Labour administration running Greenwich Council even allowed this reckless motion to reach the Council Chamber.  Over the years Greenwich Council has built a strong reputation as a good and reliable partner to our local NHS - and this group of Labour councillors are putting those relationships at risk.  The fact that Council Officers have felt the need to warn councillors of the potential consequences of voting for this proposal says it all.

"I sincerely hope that the new Labour administration joins my two colleagues and I in opposing this deeply irresponsible motion on Wednesday night."