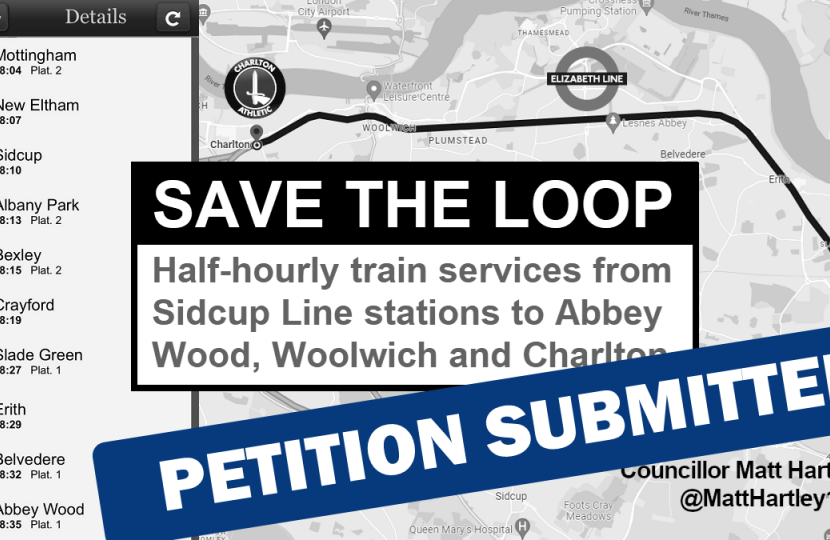 More than 2,400 residents have signed our 'Save The Loop' petition calling on Southeastern to reverse their decision to remove the half-hourly loop train connecting New Eltham, Mottingham and other Sidcup Line stations with the Woolwich Line.

Conservative councillor Matt Hartley started the petition after securing a commitment from Southeastern bosses that they are prepared to look specifically at the impact of the loss of the loop service, which is used:

The Save The Loop petition has been backed by residents, community groups and also by elected representatives at all levels, from across the party political spectrum and from right across Greenwich, Bexley and Bromley.  In response, Southeastern has given a commitment to look specifically at the issue and issued a public statement saying it will explore potential "flexibilities" in the next timetable change.

This week South East London MPs Sir David Evennett, Louie French and Abena Oppong-Asare all raised the specific issue of the loss of the loop train in a Westminster Hall debate on the changes.  Councillor Matt Hartley has today formally submitted the petition to Southeastern bosses - calling on them to restore the half-hourly loop service in full - and has also written to the new Minister for Rail Huw Merriman.

Councillor Matt Hartley, Leader of Greenwich Conservatives, said: "I'd like to thank everyone who has signed and shared my Save The Loop petition, which is helping to demonstrate to Southeastern just how valued the half-hourly loop service is.  After their disastrous changes coming into effect tomorrow, Southeastern keep claiming they are 'in listening mode' - here is a chance to prove it.  It's time to listen to local people and restore this invaluable loop service in a new timetable as early as possible in the New Year."