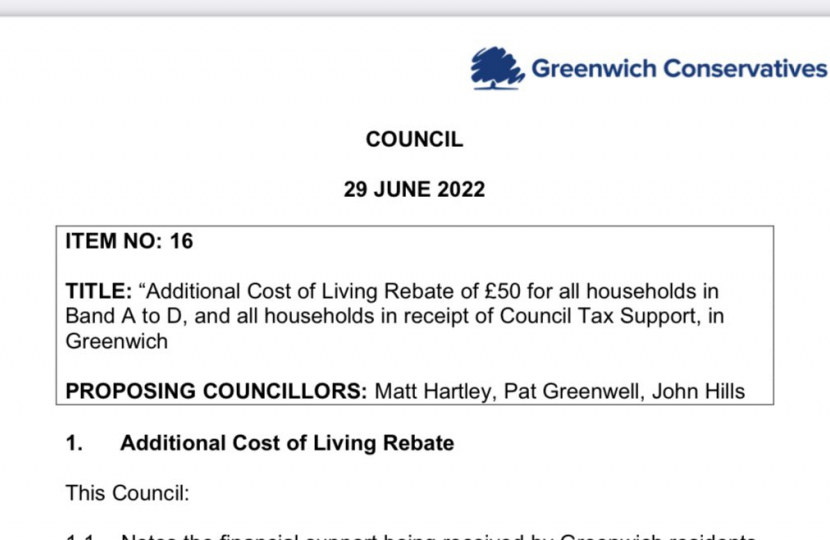 Greenwich Conservative councillors have advised the Labour-run Council against any further delay in deploying £4.9 million of Government funding, currently unallocated by the new administration, to help residents through the Cost of Living crisis.

Last week Councillor Matt Hartley, Leader of the Conservative Opposition, submitted a detailed proposal for a £50 Additional Cost Of Living Rebate to help more than 99,700 local households deal with the rising cost of living. The Rebate would be paid to all households in Bands A to D, as well as all households in receipt of Council Tax Support. The proposal is fully costed, and would be funded using more than £4.9 million provided to Greenwich Council by the Conservative Government, which is currently unallocated in the Council’s accounts. Three months into the 2022/23 financial year, the new Labour administration at the Town Hall has not brought forward any plans to deploy this Government funding.

A day later, the new Labour leadership of Greenwich Council rushed out their own paper - added to the agenda for Wednesday's Cabinet meeting just 43 minutes before the meeting started - calling for a "multi layered engagement exercise" to help decide what the Council should do on the Cost of Living. A "taskforce" was later announced on social media.

Councillor Matt Hartley, Leader of the Conservative Opposition, said: "I am pleased our cost of living proposal has forced the new Labour council leadership into exploring what more the council can do – though still not with the substance or urgency of action the situation requires. Our proposal for a £50 cost of living rebate will make a difference now.

"This policy is worked up, costed and ready to go. Labour councillors should vote for it on Wednesday, in parallel to their new ‘task force’ – or they risk creating even more delay in getting this £4.9 million of government funding out of the council’s accounts and in to residents’ pockets."

Conservative councillors have since asked the new Labour Council Leader, Anthony Okereke, 5 questions on his response to the Rebate proposal:

The Opposition's Rebate proposal will be voted on this Wednesday evening at the first Full Council meeting of the new 4-year Council term.  The agenda for the meeting can be viewed here.

UPDATE 30/6/2022:  Labour councillors amended the Conservative Motion at Full Council on Wednesday evening, and voted instead to continue to the administration's "multi layered engagement exercise" and "taskforce".  The video of the debate is available here. Conservative councillors have since proposed alternative Cost Of Living Support Options, which would use the same funding to deliver a higher quantum of support to fewer households.